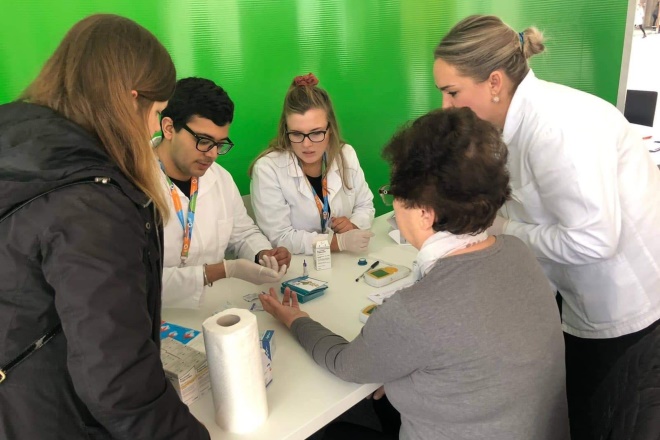 A person with an ailment may visit their pharmacist or GP to remedy it, but this means that the public may often associate these interactions with sickness. They may not consider that, as well as treating sickness, there is a lot healthcare professionals can do to prevent it, and to promote good health. It’s time to get public health on our patients’ agenda.

We can challenge these social beliefs and stereotypes by getting involved in well-designed public health campaigns thath provide education and encourage discussion.

In early 2019, I had the opportunity to be involved in such a campaign while attending the European Pharmaceutical Students’ Association (EPSA) autumn assembly in the town centre of Poreč, Croatia. The project promoted point-of-care testing for cardiovascular and metabolic diseases.

The campaign involved testing blood triglycerides, blood pressure, blood glucose and body mass index for the public in Poreč’s town centre. Feedback from those using the service was overwhelmingly positive, but, just as in England, many did not realise such services were provided by pharmacies. This must change. Promoting public health is so fundamentally pharmacy, and delivering a well-designed campaign can make a significant and lasting impression on the public’s opinion of our profession.

In November 2019, I organised my own campaign in response to the significant stigma attached to HIV/AIDS, despite recent advances in treatment — such as highly active anti-retroviral therapy and the idea of ‘undetectable = untransmittable’, and significant improvements in prognosis over the past decade. We aimed to raise awareness of these developments and change public perceptions.

We set up two stalls at the University of Birmingham; one was on central campus and the other was in the medical school. We engaged passers-by in conversation about HIV/AIDS and distributed leaflets produced by the British HIV Association and the National AIDS Trust to the staff and students at the university. We also had a presentation and Q&A session by specialist HIV pharmacist Hammara Sattar, from the Queen Elizabeth Hospital in Birmingham, on HIV care and treatments. She remarked that our campaign was valuable for health promotion and felt it had a great impact on the students at the University of Birmingham. With a team of just 11 pharmacy students to help me on the day, we were able to engage with around 450 staff and students. We even ran out of information leaflets halfway through the day.

We carried out a social media campaign in the lead-up to World AIDS Day on 1 December 2019 to share these messages. This was predominantly done through Facebook and Instagram, and we posted on LinkedIn too. We shared posts and infographics targeted at pharmacy students predominantly, but also other healthcare students, to raise awareness of HIV/AIDS. Our reach was extended by our posts being shared and commented on by members of the International Pharmaceutical Students’ Federation and EPSA team showing support for our campaign. It was a great way to build international relations, but it was also a steep learning curve for me; I had never organised an event of this scale before, and it really challenged my own understanding of public perceptions.

Feedback on the campaign was elicited through a survey distributed to those we engaged with at our pop-up stalls and at Hammara’s presentation. The campaign was well-received: people generally saw the importance of knowing about these health messages, and reported learning something new from the event.

Hosting a public health campaign is a great way to share insights into advancements for HIV/AIDS care. Campaigns are generally easy to organise, and we pharmacists and pharmacy students can do so much good by delivering these campaigns to our local communities. I highly recommend all students interested in public health issues seriously consider organising one themselves. My university was extremely supportive of me doing so and I hope yours will be too.